DAY TWO HUNDRED AND SEVENTY SIX
Throughout the ages people have believed that the full moon has adversely affected people. The term lunacy is derived from the Latin word Luna because it was believed that the moon caused mental illness and insanity. People swear they know when the full moon is happening without even looking at a calendar because weird things happen. I've never believed any of it, until today.
I had hoped to take a trip up to Joshua Tree today to enjoy that mystical landscape under the full moon. So when I went out to get a bite to eat before leaving I noticed lots of smoke from a fire covering the Little San Bernardino Mountains and thought there might be a fire up there. I couldn't find any news report of it and the Park Service did not answer their phone so I decided to play it safe and not go. I later learn that the fire was near San Bernardino but the smoke would have ruined my hike anyway so I figure I made the right call.
Next I told the wife that I'd be hiking near home due the smoke and she said she wanted to go along. Excuse me, I said. Do I know you? 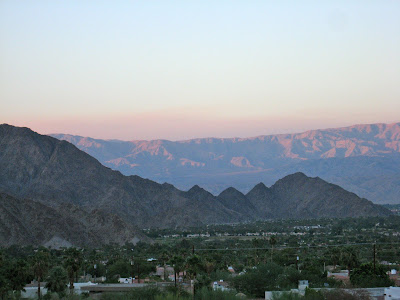 I took this picture of the smoke over Joshua Tree. The full moon also affected my camera, which went on the fritz. It's the second time this year. I really like this camera, a Canon PowerShot S3 but its reliability, or lack thereof, is a major drawback. Or maybe it's just the full moon. 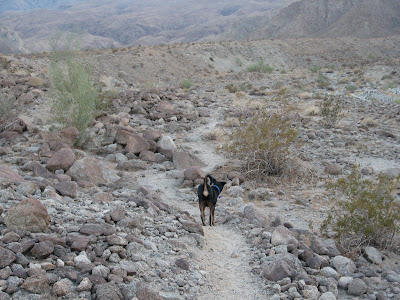 Kahlua leads the way up the trail and is thrilled to go hiking no matter what the phase of the moon. I just hope she doesn't turn into a wolf. 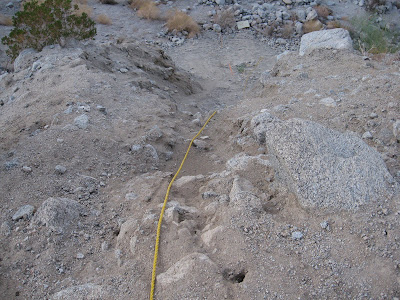 The embankment above the wash has eroded a lot since I was last up here. I heard it rained when I was in Lake Tahoe so the erosion must have happened at that time. Someone has put a rope down the hill to assist climbing it. Looking at the rope I don't think it'll be much help. 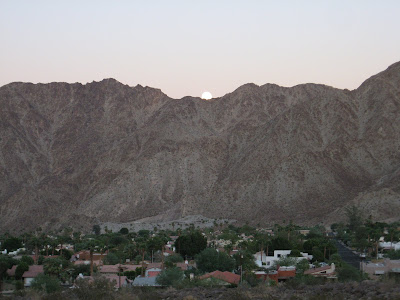 The moon makes its awaited appearance. 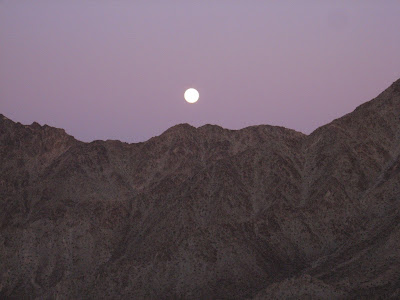 The camera I have only has a 4X zoom lens but it looks like my other camera will be going back to the Canon Repair Department....again. 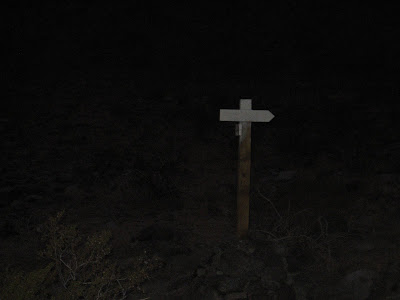 We hike up to the junction of this trail and enjoy the full moon before turning back. 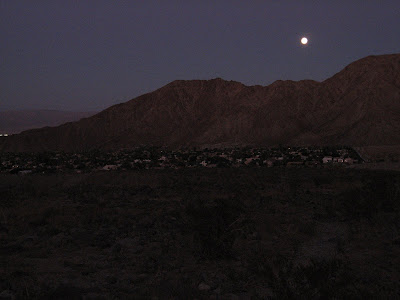 The light from the moon fully illuminates the trail and it is a good thing. The headlamp we brought it malfunctioning and not giving us as much light as we'd like to make it down a short steep section near the trail's end. I've always loved going out in the full moon but after tonight I don't know. Maybe there's something to all those superstitions after all.
Posted by Hal Summers at 9:14 PM

Linda must have read your previous blog and thought what the other half of the world thinks about a full moon, ROMANCE.

so awesome that linda went with you! this cooler weather has all of us desert dwellers excited to be outdoors. maybe you can make a whole-family hike one of these days. we need someone to take a pic of YOU on the trail for once! ha ha