DAY THREE HUNDRED AND SIXTY TWO
It is a good thing that I am near the end of my yearlong adventure. If I'd had any day like today earlier in my endeavor I doubt very seriously that I'd have gotten this far.
My hike started out well enough. I headed east of Interstate 10 and got off on the Red Cloud Mine exit. I went north and started exploring the mountains in the southeastern corner of Joshua Tree National Park. It wasn't until after the hike that things went downhill. 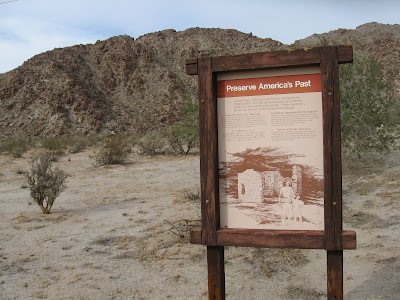 Driving along the road I see this sign. They don't ever put these where there's nothing to protect so this is a good indicator that something of interest is nearby. 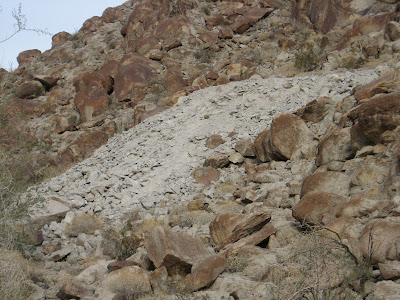 I head up the wash west of the sign and see this large pile of tailings on the hill. 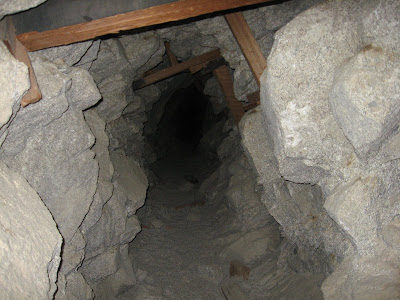 Hiking up to the top of the pile I see a tunnel going back quite a ways. I would follow it to the end but the only light I brought is a very small LED headlamp and it doesn't offer quite enough light for me to feel comfortable. Also, who'd call for help if this thing caves in? 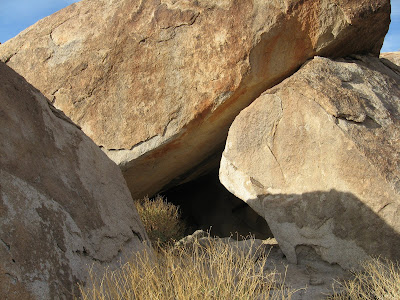 I hike around for about another hour and don't find much to report until I come to this. It looks like this just might be some old Indian rock shelter. 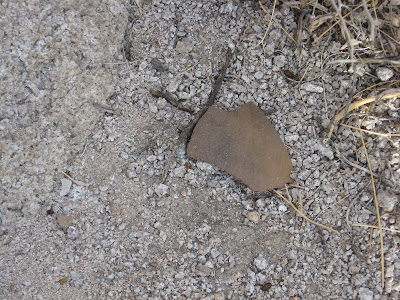 A pottery sherd lying near the entrance makes this seem very promising. 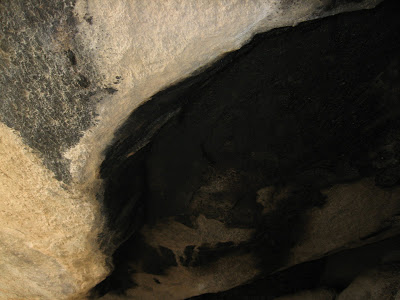 There is a large amount of tarry pitch on the roof of the main room of the shelter. 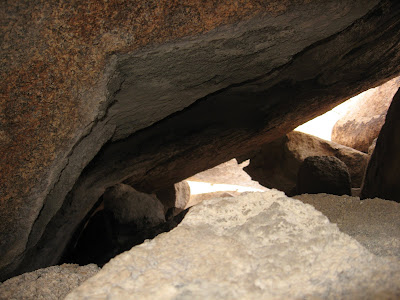 This must have been in use for a long time because there are several rooms and each one is covered with pitch. This is Grandma's room. 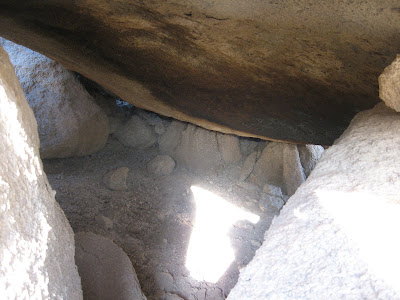 And this room belonged to the kiddies. 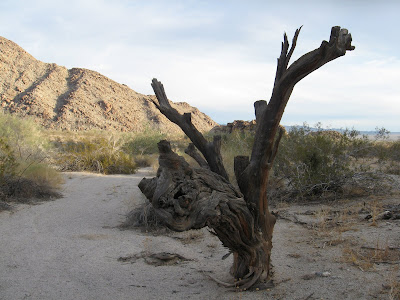 After leaving the rock shelter and traversing along the hillside I come upon this tree that looks like someone cut off the end of all the branches. 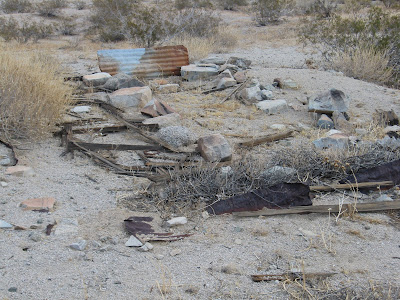 I quickly discover why: someone lived here. 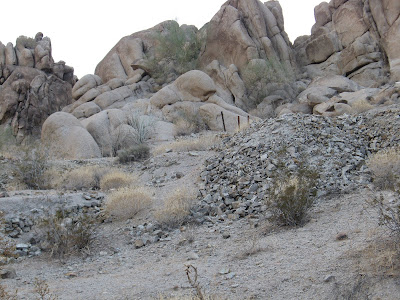 They also mined here. There are lots of tailings around this hillside. 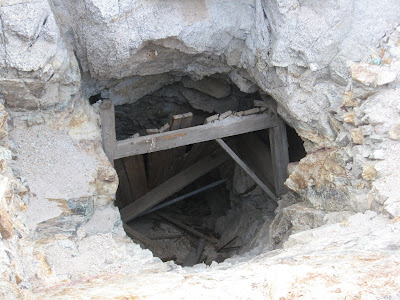 This mine goes down rather than into the hill so I don't want to get too close. 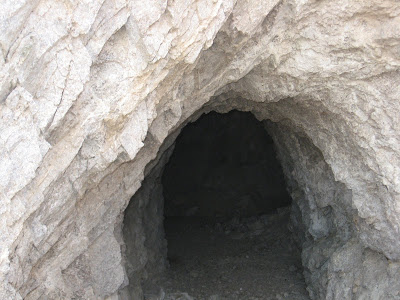 There is a tunnel but I'm faced with the same not enough light problem so I won't be going in. 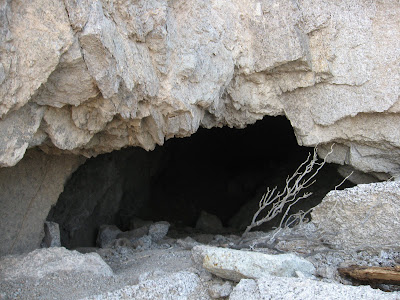 And this one is just a tad too small. 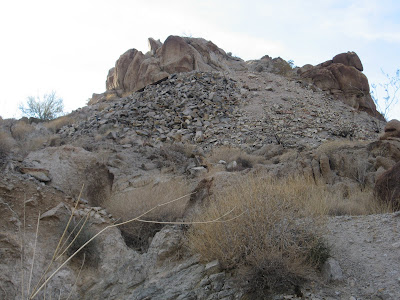 Up the hill there are lots more tailings so let's see what's up there. 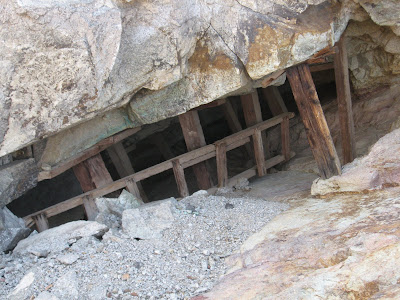 There's a whole superstructure that was set up in order to tap a vein but I won't be doing any exploring here. 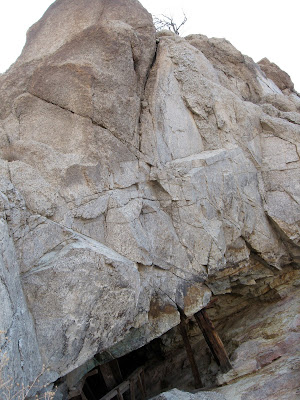 The whole mountaintop is being supported by a bunch of old timbers. Now that looks real safe. So I looked around a little more and hiked back to the Jeep. That's when the fun began. 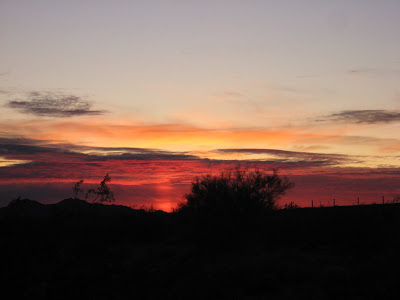 I stopped to take a picture of this sunset and got a flat. Somehow the key that removes my spare got lost--I'm terrible with keys--and so I had to drive miles on a flat in order to get to a place where a tow truck could meet me. The wife drove out to Chiriaco Summit to rescue me but Russ, the tow truck guy, managed to get the lock off of the spare and I was able to drive home, getting there about four hours after finishing my hike. 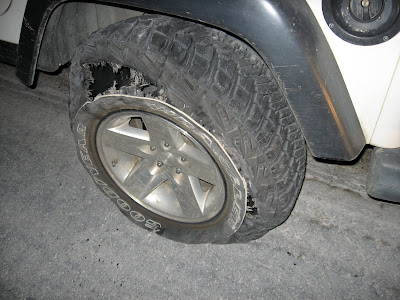 Now I've got to get a new tire and these things aren't cheap. I just hope the rim's OK.
Posted by Hal Summers at 9:35 PM

Always a special treat for me to read about mines in your posts. Looks like you had a lot of exploring success!

Bummer on the tire! I assume it's so mangled since you had to dirve on it.

That rim looks nasty, good luck on that one. Only 2 days to go. Woo hoo!

Very cool area of Joshua Tree, the one picture with the mountain being held up by old timber was a little unnerving..great job on your year of daily hikes!