DAY ONE HUNDRED AND FORTY
Hiking is an important activity for me. It strengthens my body, straightens my mind and energizes my spirit. It is why I do it every day. But today it really didn't seem to matter too much to me.
I had big plans for today. There are a few longer and more challenging hikes I want to do and today was going to be perfect for them. I had not obligations and if I could find someone to take my kids to school, I would be free at last.
Then my mom called. She needed a chauffeur to take her to Riverside to meet with a doctor about getting a motorized scooter so she could get around. She'll be 83 in a couple of weeks and uses a walker so a scooter would help her immensely. It was a sacrifice but you just don't say no to Mom. It's not like she never sacrificed anything for me.
So I took her to Riverside and we met with the doctor. No scooter. Now, Mom is an almost 83 year old widow. She has had a stroke, two knee replacements, back surgery and an angioplasty. She has arthritis and her feet are in such bad shape they are curled under. It is painful for her to walk.
So the doctor asked how she gets around her house. She said that she has chairs in different rooms and if the pain gets too bad she sits in the chairs to rest. "But you can get around?", he asked. Yes, Mom answered.
Denied. Just because it's painful for her to get around is no reason to approve a scooter and Medicare won't pay for it unless she is unable to get around. So because this mother of seven can endure pains better than some other people she must continue to do so without hope of relief. That makes a lot of sense.
After we left disgusted with the denial, we had a nice lunch and headed home. When I was almost home I get a call from my wife's work and they said she wasn't feeling well and I'd need to pick her up. When I get to her work to get her, she is gone. They had called the paramedics and now she's in the ER. She was feeling faint, her color was bad and she was incoherent, not normal for her, at all.
After dropping Mom off, I head to the ER. One of her friends is waiting but they won't let her in. I buzz the nurses station and get in. She's hooked up to IVs and has some other wires and tubes going to her and, even though she is the world's most beautiful woman, she looks terrible. I talk to the nurse and they're doing tests to see what's going on. Since I can't do anything I have to go and pick up our son at school.
Returning to the hospital, I see she looks better. It's probably dehydration but they've run more tests to jack up the bill and so I leave again to feed the kids. When I come back, she sends me home because my pacing around is going to give her a stroke. She's feeling much better now.
I went on a little hike near my house hoping it would make me feel better. 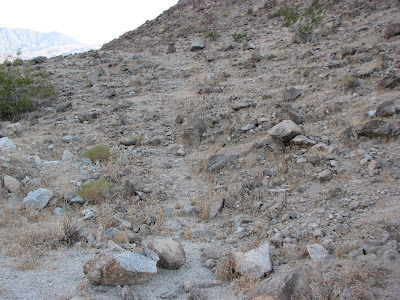 I find this little trail and follow it but it goes nowhere. After walking around a little I stumble on another little footpath and follow it. 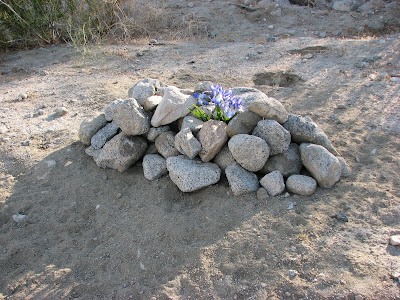 I come upon an area where it looks like someone buried their pet. 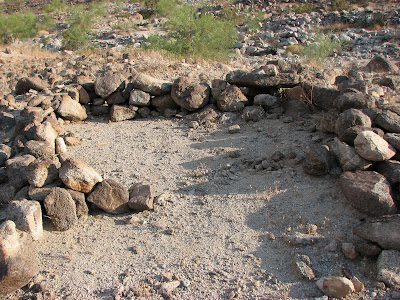 Following the trail further, I come to this little structure that looks to be of recent origin. I've been up here before and never saw it and I don't think this would be easy to miss.
I wander around further up the alluvial fan but I don't really see anything worth photographing and, honestly, my heart just isn't in it today.
A bit later on I get a call from my wife that she's being released and is feeling 75% better, a little weak and groggy but OK.
She's in the other room resting now and knowing she's here is more restorative to my soul than any 1000 hikes I could do. Tomorrow, I'm sure, hiking will resume its place of importance in my heart but tonight it just seems like a trivial exercise in self-indulgence.
And if I find a nice easy, flat trail and we ever get my mom one of those scooters, I want to take her along with me. More than anyone I know, she deserves a little self-indulgence.
Posted by Hal Summers at 8:48 PM

Hal, I love you dearly, dear brother of mine. BUT, the madre will be EIGHTY TWO rather than EIGHTY THREE. You have got to wait until NEXT year for that lovely event. She was born in 1927. Dad was born in 1926.
Of course she is still younger by far from Gus ( old geezer at her church ), who turned 96 recently. And Gus is a young whippersnapper next to Dora, the mother of my next door neighbor, Margie. And mom is a spring chicken just out of the shell next to Dora who celebrated turning 102 in April!

Glad to hear your wife is doing better!
We'll keep praying for her and your family.
Have a great day!!

Hey Hal, my heart goes out to you buddy. Appeal that scooter denial, and then appeal again. That is not "getting around" - call Yes, I Can and see if they can give you some suggestions. Hope your lovely wife is better by now.

oh my god! i can't believe linda had to go the hospital! it really was dehydration, right?!?!
i just got back last night from my 9 day backpacking trip on the PCT...130 miles. i have some great suggestions for day hikes for you in the san gabriels and san bernardino mtns.
btw, your blog is the first place i went when i got online after 9 days! i told alot of my trail friends about it, too! i'm so proud of your accomplishments! happy hiking. from darlene
please tell linda hi from me.

Linda's doing much better now and thank you everyone for your kind thoughts and prayers.