DAY ONE HUNDRED AND FIFTY SEVEN
Key's View is a lookout point in Joshua Tree National Park. It is the highest point one can drive to and offers a spectacular view of the Coachella Valley, the Santa Rosa and San Jacinto Mountains, the Salton Sea and beyond. Thousands of park visitors enjoy Key's View every year.
There is a hiking route to get to Key's View. It starts just north of 1000 Palms and heads up Pushwalla Canyon. From there, it veer into the canyon that heads to the Hidden Gold Mine and then ascends a ridge to get to Key's View. This route is very seldom used because it involves difficult cross country travel, good navigation skills and a bit of luck. Other than the few people that I know who have completed this route I have never heard of anyone else doing it.
Then there's the route my buddy, Carl, and I did: Key's View the really, really, really hard way. No one has ever come upon Key's View via this route before and I doubt anyone will want to again. Our objective is to hike up Fan Canyon, cut over to Stubbe Spring, then go to Fan Canyon View and after that travel cross country along the ridge to Key's View. It sounded like a good plan, if it had only worked out that way. 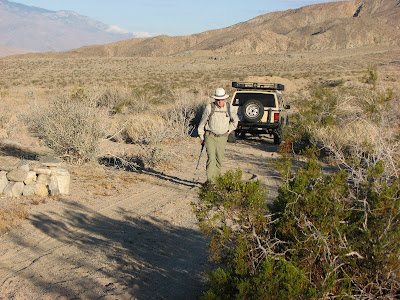 Carl and I are dropped off by Carl's friend, George, and we head out across the desert. 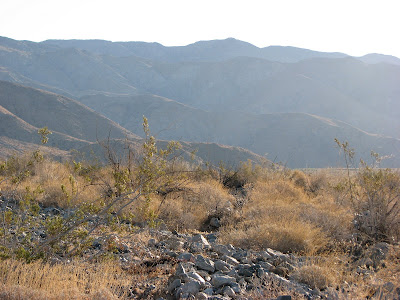 Several hours from our departure, our plan is to reach Key's View, which is one the distant ridge well above our starting point. It is just to the right of the highest point in this picture. As we walk up toward the canyon, a dove takes off out of the bush. It looks as if she is wounded as she flutters not far from us. But we know it is a ploy. 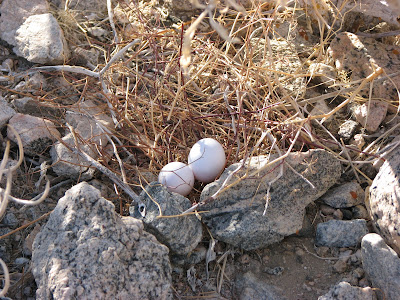 She is trying to attract our attention away from her nest holding two precious eggs. It's a good thing Carl and I already had breakfast because they wouldn't be that filling anyway. 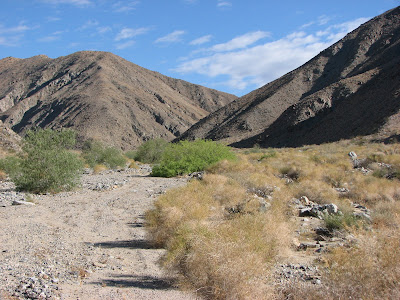 Heading up Fan Canyon, there are several Desert Willow growing, indicating a good water source just beneath the surface. The lighter green plant is mesquite, which is also a good indicator of water and a main food staple of the Indians who once inhabited this area. 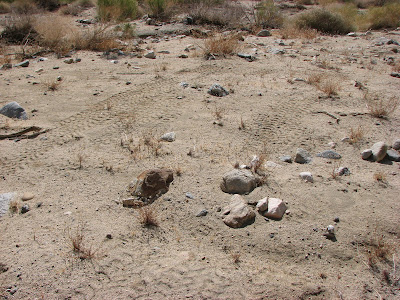 We notice Jeep tracks well up in the canyon. This area is a wilderness in the Joshua Tree National Park and vehicles are illegal here. It is so infrequently traveled, however, the chances are very slim that any Ranger would be patrolling to catch any scofflaws. 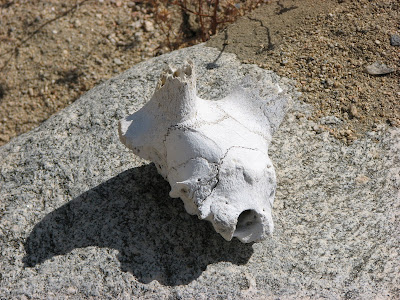 We find our first of many bones along the way. This is probably from a Bighorn. 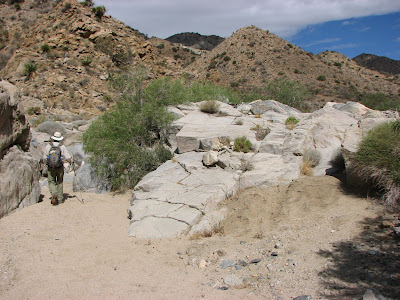 Carl makes his way through a narrow passage in the canyon. Although we are walking on sand for a couple of hours, the going is fairly easy because the sand is packed down and not soft and while the elevation gain is steady, it is not steep at this point. 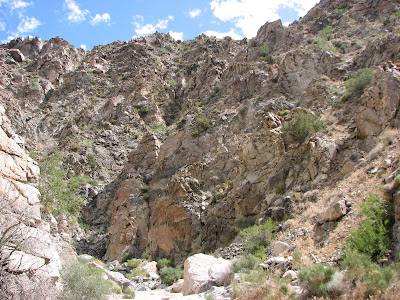 We get to a fork in the trail and discuss which way to go. Instead of going to the east, we head north. It is a decision that will add about five or six extra miles onto our trip. When you are on an adventure, however, there cannot be any wrong decisions unless, of course, one leads to your death. Other than that, you are just exploring. 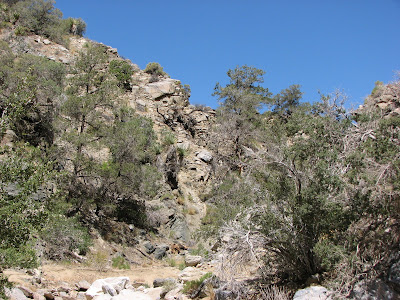 As we steadily gain elevation, the plant life changes and the weather stays cool. We get a feeling that we're not alone and see a movement in the wash ahead of us. 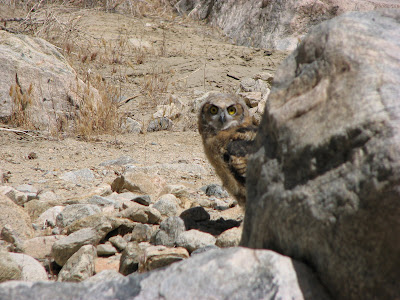 Someone is here checking us out. 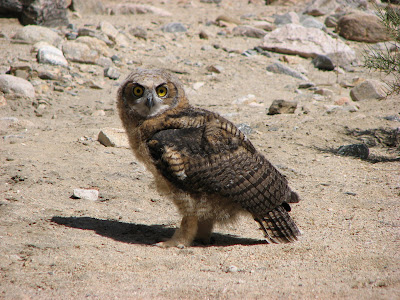 I'm not a bird expert but I think it's a young Great Horned Owl. He hasn't lost his baby feathers or grown into his full adult plumage yet. He is pretty big standing well over a foot or more tall. 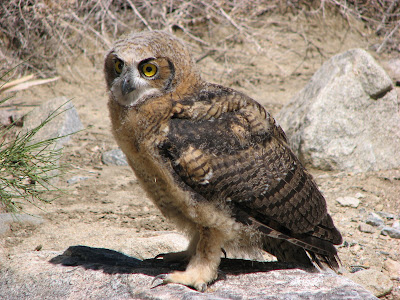 I get as close as I can without startling him. He's a youngster and has probably never seen humans before. I doubt many people ever come up the way we did to this area of the park. We admire him for a while and then head on. I don't want to make him mad because those talons look like they could inflict some damage. 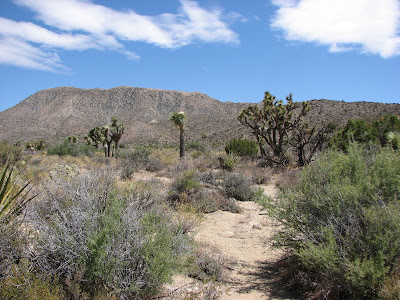 We hike up the canyon until it opens up into a large basin. I think that mountain in front of us is Quail Mountain. If it is, we have gone way too far north. 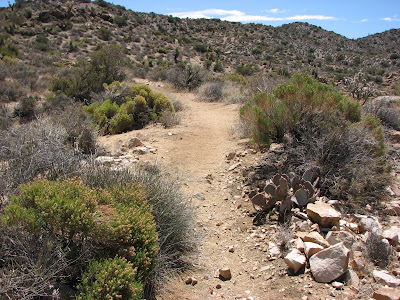 We then hit the California Hiking and Riding Trail. Now I know we've gone too far. That's OK, though because neither of us has been here before and we're enjoying seeing some new terrain. 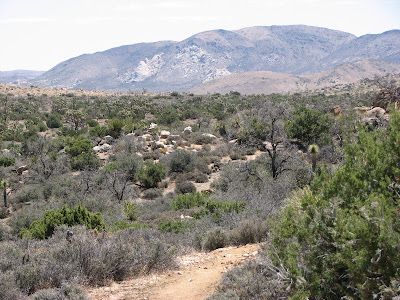 We head into Juniper Flats and have a nice view of Ryan Mountain in the distance. 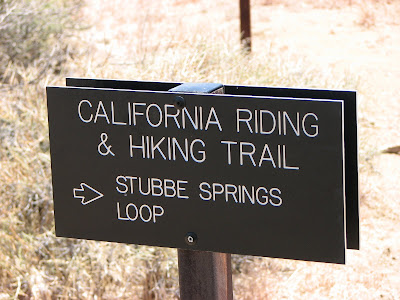 It's not how we intended to get to Stubbe Springs but we're going to get there one way or the other. Carl's been on this trail but I haven't so I'm enjoying the experience. 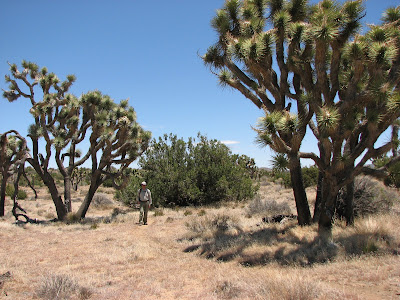 Carl dwarfed by some Joshua Trees along the trail. 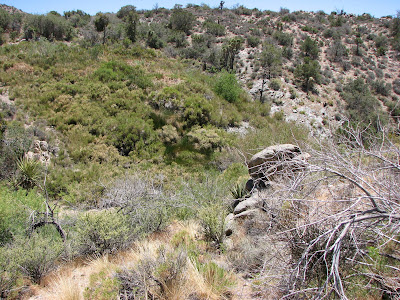 We get to Stubbe Springs and while it doesn't look like much, it is an important source of water for wildlife in the area. 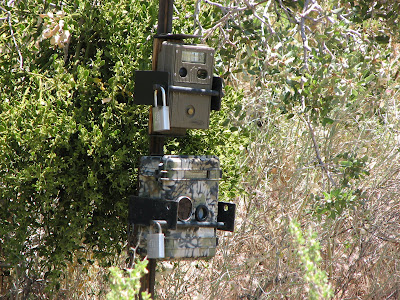 The Park service knows this so they've placed these cameras overlooking the spring hoping to get some pictures of the springs' visitors. 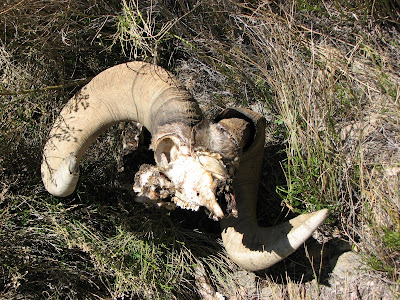 I wonder if they got any pictures of what happened to this guy. There are some other skeletons here as well indicting that predators stake out the spring looking for dinner. We stop here briefly and then move on. 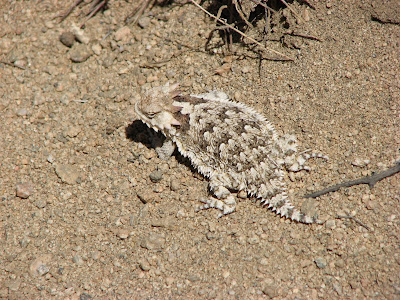 Along the way, I almost step on this little guy. 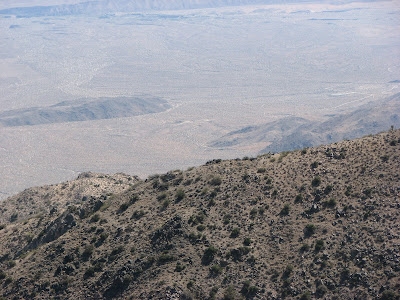 We get to Fan Canyon Viewpoint and look down upon where we started. In the middle of the picture on the left side is a small hill. This is called Fan Hill and we started hiking not far from there several hours before. 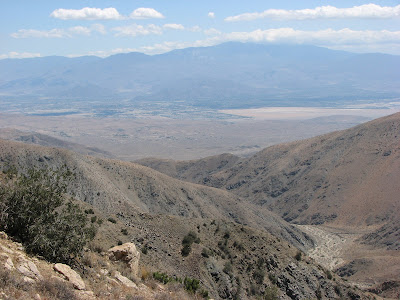 All along the ridge line, we have great views of the Coachella Valley and the mountains beyond. If there were a trail here, this would be a very popular destination for hikers. I'm grateful there is not, however, because the wildness and solitude here are remarkable and make it well worth the extra effort. 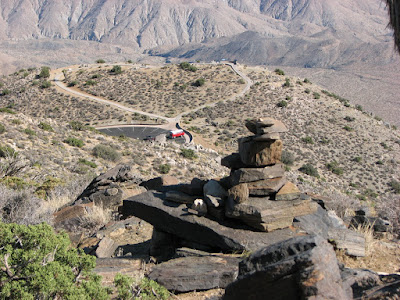 After a few more miles of hiking over tough, rocky terrain we get to where we can see Key's View. We've made it at last! We're a little behind our original ETA but we've done very well considering the amount of terrain we covered. 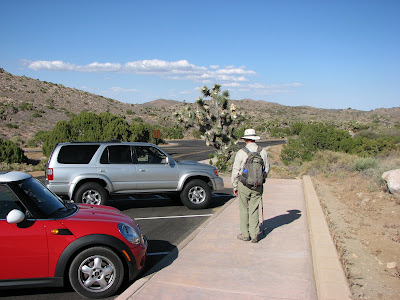 Carl walks up to the vehicle where our ride is waiting--Thank you, again, George!--and it sure will be nice to sit down. 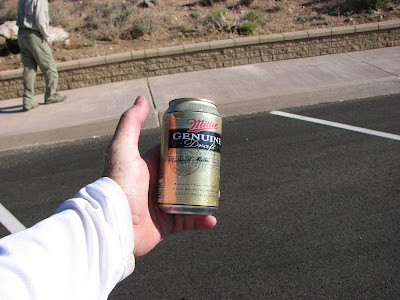 But first we've got to get some more fluid in our bodies. And while I'm not a big MGD fan, I don't think I've ever tasted anything so wonderful.
Posted by Hal Summers at 8:13 PM