Best Day on San Jacinto EVER!

DAY ONE HUNDRED AND FIFTY FOUR
San Jacinto is my favorite mountain. I've climbed it dozens of times from all directions and in all seasons. It never fails to disappoint and I never get tired of it. Of any mountain I've climbed--Whitney, Rainier, Hood, San Gorgonio to name a few--I think it has the best view. While it is easily accessible from the Palm Springs Aerial Tramway, there are also some very challenging routes up the mountain which involve the need for mountaineering skills and equipment. Anyone living in Southern California should climb it at least once.
Of all the great hikes I have ever had on Mount San Jacinto today's was probably the best. 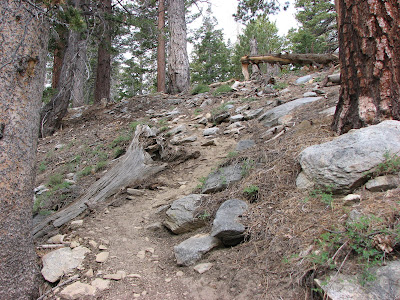 I started from the Tram and hiked up to Sid Davis Canyon. This is the best way up the mountain and the quickest. The weather was overcast, a bit cool with just a hint of breeze. The temperature was about 50º at the Tram. Sid Davis Canyon starts where the Round Valley Trail crosses the creek. The trail is steep in points but it is MUCH shorter than the main Round Valley Trail. I go this way 90% of the time. 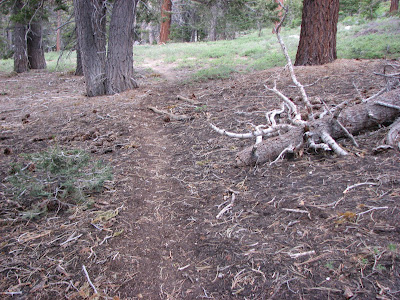 The trail comes out to Tamarack Valley just below Cornell Peak. As I reached the valley the weather started changing. It got worse. 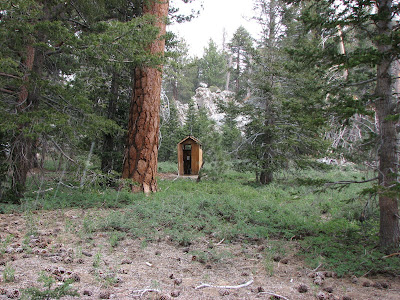 When I was near this little outhouse I saw a HUGE lightning bolt up somewhere near the top of the mountain and heard an instantaneous thunder clap. It made me wonder if going to the summit was such a good idea. Then it started to hail. (If you click on this picture to enlarge it and look close you can see the hail). 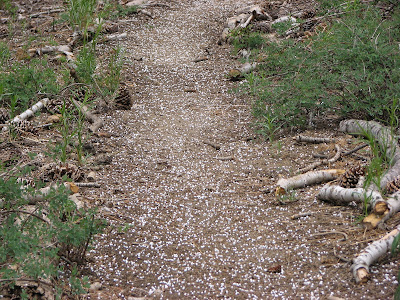 I started looking for a tree to hide under--the outhouse probably smells--when I noticed that the hail was not hard and icy like most hail. It was more like Dippin' Dots. 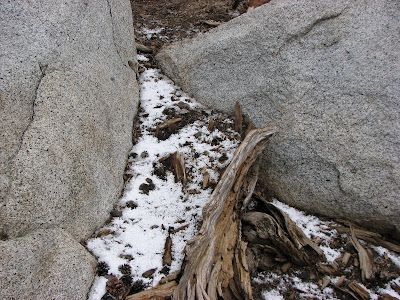 Then the hail stopped. There were some places where a fair amount of hail fell but it was never an issue and never affected traction on the trail. Well, off the trail. 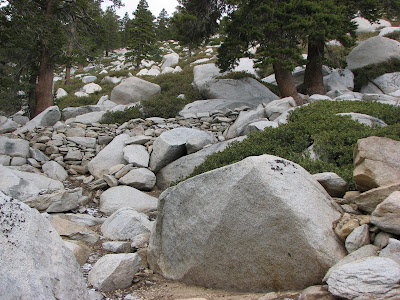 From Tamarack Valley, I go straight up. There is a gully that comes down from the saddle between Jean Peak and San Jacinto and this is the way I go. I stay to the right of the gully and in the trees and boulders. It is the most direct way up the mountain and you don't have to destroy your legs on the never ending bushes that are on the East Face of the mountain. After a bit of climbing, you come to the main trail. 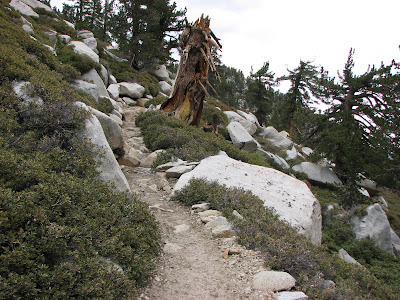 From here, the going is easy. 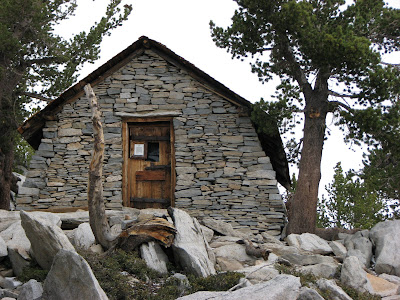 I get to the stone cabin near the summit and am happy that if the lightning returns I can duck in here and at least have some shelter. 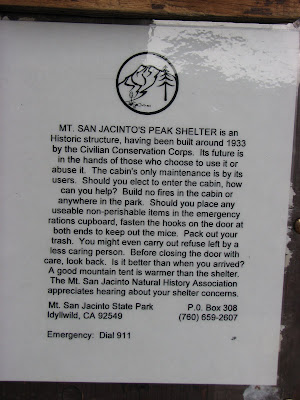 On the door is a sign telling you a bit about the hut. 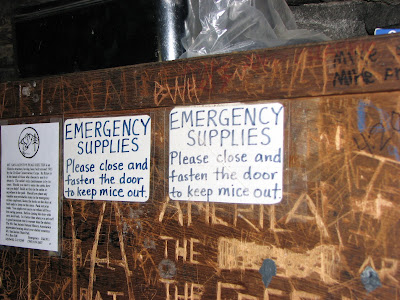 Inside, there are a few bunks with sleeping bags, a mantle with summit logs and some emergency supplies. There have been several occasions when this little cabin has been a lifesaver for people caught in inclement weather, unprepared. 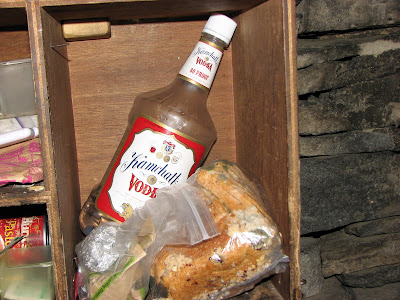 It's nice to know the emergency supply cabinet is stocked with everything necessary for human survival. And no, I'm not talking about the moldy bread. 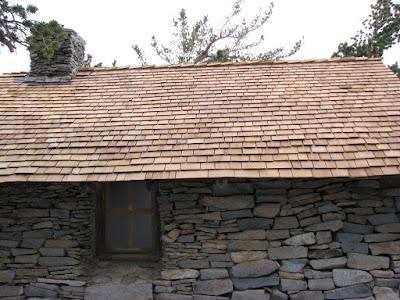 It is also nice to see that the cabin got a new roof recently. I guess they must have done that before the budget crisis. 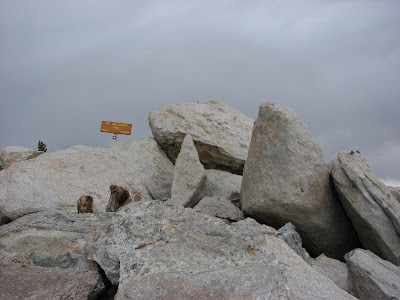 At the summit, there were clouds all around but where I sat it was perfectly clear and beautiful. You could not look down toward I-10 because it was cloudy in that direction but in every other direction you could see everything incredibly well. 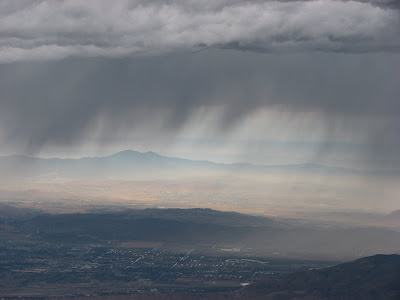 While it was very windy down by the cabin at the summit it was eerily still. I sat there for about fifteen minutes watching lightning bolts hammer the area around Hemet. I tried to get some pictures of the lightning but had no luck in that regard. Every time I'd snap the shutter it was too late. Maybe I should bring a video camera on some of my hikes. You can see Saddleback Mountain beneath the clouds and the Pacific Ocean in the distance. 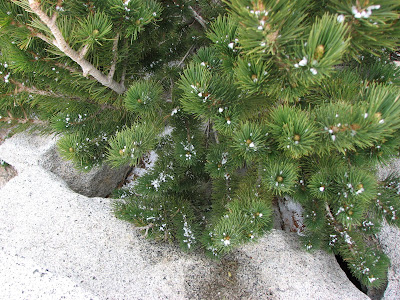 There was even some Dippin' Dot hail at the Peak but none when I was there. 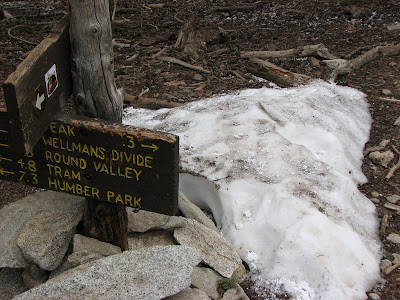 On the way down, I notice just a little bit of snow left near the trail sign pointing to the summit. Notice the hail pellets on the snow. 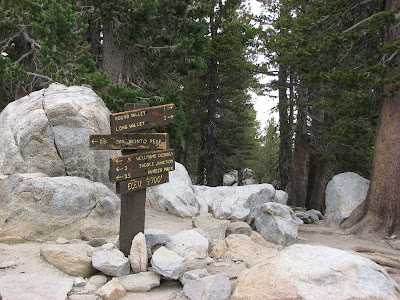 I head down on the main trail over to Wellman Divide. It is a long, nearly flat slog. I now remember why I prefer to take the shortcuts I do. 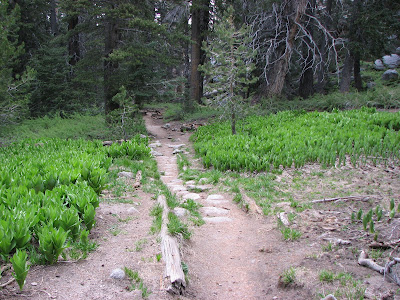 After getting to Round Valley, I notice the Skunk Cabbage starting to come up around the trail. Soon these plants will be huge and surround the entire meadow. 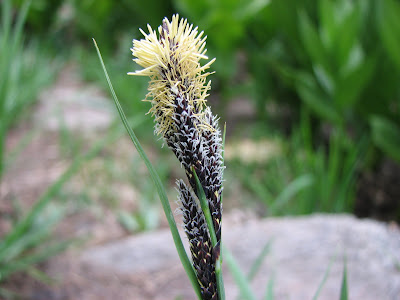 Alpine flowers are starting to bloom as well. It's a great time to go up on the mountain and if the Governor gets his way, you'd better do it soon. Mount San Jacinto State Park is on the list of parks slated for closure do to budgetary constraints. There is never a bad day on San Jacinto but for me today was the best EVER!
Posted by Hal Summers at 5:09 PM

wow! that was a great entry! your enthusiasm and joy of the the mountains really shined thru. you are doing so well on this quest! thanks for the great blogging. from darlene

Hal, I'll bet the Mt. San Jacinto Natural History Association provided the labor and materials for the new roof on the summit shelter cabin. I'd just about bet my last dollar that the state didn't pay for it.

I'm thinking about hiking up in October. It will be my first time. What is it usually like at that time of year?